Phantom Quartz is Free Fusions' interpretation of the fusion of Rose Quartz and Lapis Lazuli.

Spirit Quartz has a thin body with four long arms and an unknown amount of legs. Her skin is lilac and she has two eyes on her face with black scleras, and she also has two more eyes in the palms of her bottom pairs of hands. She also has a pointed nose and full lips with dark purple lipstick. Her hair is light lilac with lighter accents, and is is short and voluminous with a messy cut.

Both Rose and Lapis are haunted by their pasts, so their fusion is a physical manifestation of past mistakes. She is a perfect spy, but she is so bitter and jaded she can rarely be persuaded into doing useful work.[1] 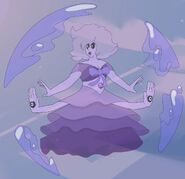 Add a photo to this gallery

Retrieved from "https://free-fusions.fandom.com/wiki/Phantom_Quartz?oldid=791"
Community content is available under CC-BY-SA unless otherwise noted.